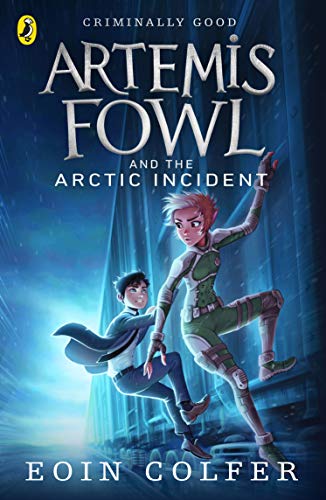 Artemis Fowl wants to find his father, held hostage in Russia; Holly Short wants to find who’s supplying the goblins with human technology; Foaly wants to find out who’s disabled all the LEP Technology and pointed the finger at him. Artemis has received a ransom demand for his father but is captured by the LEP who suspect him of supplying the goblins with dangerous Human technology (batteries). He convinces them he’s innocent and agrees to help them if they help him free his father. Meanwhile, down in the underground world, chaos has arisen. An unknown traitor has stolen forbidden weapons and armed a horde of trolls, setting them loose to wreak havoc on the citizens. Clues lead Captain Holly Short straight to Artemis, and she exacts a small bit of revenge by kidnapping him, just as he once kidnapped her. But soon she learns that Artemis isn’t behind the chaos, and if she’s to have any hope of stopping it, she will need his help. As a result, these onetime adversaries must now join forces—a mix that proves to be both charming and volatile. The world that Colfer creates is as vivid and fantastical as any shire, gotham, or galaxy far, far away in recent memory. Grade: A-.

A witty blend of fantasy, spy tale, and action movie, readers are sure to enjoy the fast-paced adventures of Artemis, his powerful sidekick Butler, Foaly the centaur, and fairies Holly and Root. As soon as they turn the last page of this book, they’ll be hungering for the next one.